“With lean, lovely prose she takes us on a clear-eyed, compassionate journey into a mysterious world in which every story begins as a ghost story.”   — Michael Perry, author of Population: 485, Visiting Tom, and Peaceful Persistence

Where the Lost Dogs Go 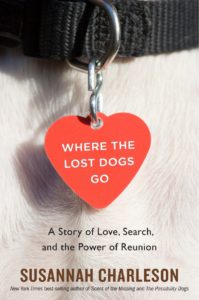 A search dog with a gift for compassion, a stray dog with a gift for survival, a torn family who learned to make a difference, and the heartbreak healed by them all. When a K9 search specialist for missing persons turns to the work for lost pets, families are reunited, including her own. 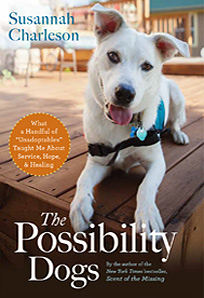 “You don’t have to be an animal lover to be moved by this beautifully written and impassioned account of the author’s work rescuing dogs from shelters and training them to be service animals.” Publisher’s Weekly, March 18, 2013 (starred review)

An inspiring story that shows how dogs can be rescued, and can rescue in return.

With her critically acclaimed, bestselling first book, Scent of the Missing, Susannah Charleson was widely praised for her unique insight into the kinship between humans and dogs, as revealed through her work in canine search and rescue alongside her partner, golden retriever Puzzle.

Now, in The Possibility Dogs, Charleson journeys into the world of psychiatric service, where dogs aid humans with disabilities that may be unseen but are no less felt.

Read more about The Possibility Dogs

Scent of the Missing 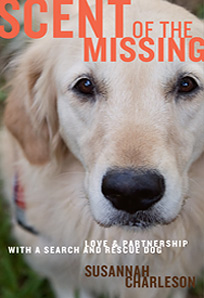 In the wake of the Oklahoma City bombing, Susannah Charleson clipped a photo from the newspaper of an exhausted canine handler, face buried in the fur of his search-and-rescue dog. A dog lover and pilot with search experience herself, Susannah was so moved by the image that she decided to volunteer with a local canine team and soon discovered firsthand the long hours, nonexistent pay, and often heart-wrenching results they face. Once she qualified to train a dog of her own, she adopted Puzzle, a strong, bright Golden Retriever puppy who exhibited unique aptitudes as a working dog but who was less interested in the role of compliant house pet. Scent of the Missing is the story of Susannah and Puzzle’s adventures as they search for the missing—a lost teen, an Alzheimer’s patient wandering in the cold, signs of the crew amid the debris of the space shuttle Columbia disaster—and unravel the mystery of the bond between humans and dogs.